Do you have any questions about the VAT number?

When an entrepreneur looks for company data, he usually starts with the VAT number and corresponding company number. Every entrepreneur has a unique VAT identification number and is legally obliged to mention it in his accounts, on his website and other business communication tools. On this page you will discover the most frequently asked questions about the VAT number and their answers. 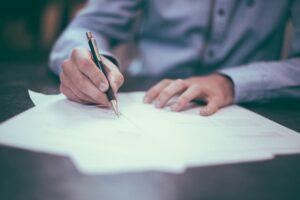 What does VAT mean?

Since 1971, the value-added tax, VAT in short, has come into effect in Belgium. Every consumer comes into contact with this tax when purchasing products and/or services. The end consumer pays the selling price, taxes included. The vast majority of products and services are subject to the standard VAT rate of 21%, sometimes the intermediate rate of 12% or the reduced rate of 6%. Some items, on the other hand, are exempt from tax.

But what does VAT mean for an enterprise?

Every company charges VAT on its invoices. Customers, in turn, pay the invoices and thus also the tax. Afterwards, the company must transfer the VAT to the government’s treasury. This payment is made in stages, meaning that the VAT is not paid to the treasury all at once. In every step of the production and distribution process, tax is due to the treasury. For this reason, VAT is sometimes referred to as consumption tax. As a VAT-registered company, you can reclaim this input tax.

Who is VAT registered?

Before starting your activity, you should check whether you are liable for VAT or not. If your company delivers goods or provides services on a regular and independent economic basis, which are described in the VAT Code, then you are subject to VAT. These activities are described in the VAT Code, Article 4. Even foreign companies must make themselves known when they carry out activities in Belgium. There are some special regulations (see among others VAT Code, article 44) such as liberal professions, for example doctors, dentists, nurses, midwives, physiotherapists, psychotherapists… These professions are exempt from the tax.

VAT payers must submit their VAT declaration by the 20th day of the month following the month or the quarter in which the activities took place. The declaration must be submitted digitally with the Intervat application. For this purpose, you must identify yourself with your electronic identity card or a digital certificate such as Global Sign, Isabel or Quovadis.

The VAT subjected company has the task and responsibility of passing on the collected tax to the government. The company functions as an intermediary between the Belgian treasury and the end consumer, the one who pays the VAT at the end of the line.

Where to apply for VAT identification?

Is a registration number the same as a VAT number?

In the past, the National Register of Legal Entities was authorised to assign all legal entities a national number of 9 digits, starting with 2, 3, 4, or 9. If the company was liable to VAT, the national number became the ‘VAT number’ and was preceded by BE. For sole traders and associations, it was the VAT authorities who issued the 9-digit numbers, starting with 5, 6, 7. These numbers were automatically ‘VAT numbers’.

In addition, there was a trade register number for ‘commercial’ companies. This was a separate register at the Ministry of Economic Affairs. Linked to a national or VAT number, these two numbers formed the unique IDs for a company.

Since 2003, the trade register has been abolished and the Crossroads Bank for Enterprises is authorised to allocate a company number to each entity. As a result, the National Register and the VAT authorities had no longer the authority.

How to look up a VAT number?

Retrieve the desired VAT number quickly and easily with the search engine on our homepage. Enter the company name of your choice and immediately receive an overview of the companies matching this name. Moreover, you will see how the company is ranked in the top and its sector. This position is determined by the turnover figure and can be found in section 70 of the financial statements. You can also consult general information such as name, address and place of residence using the search bar.